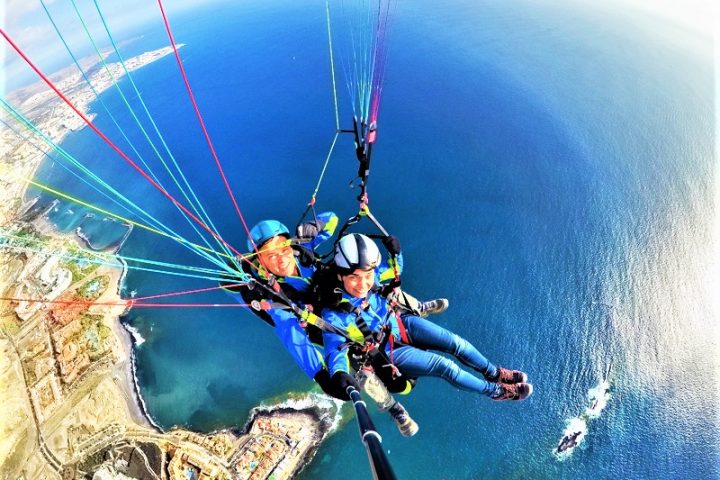 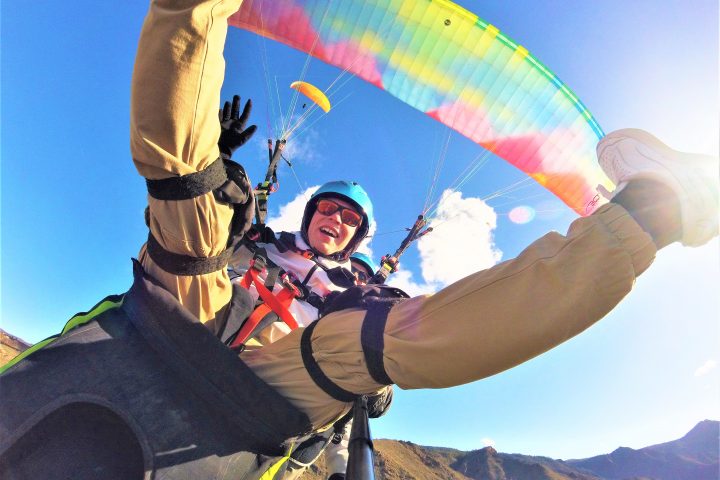 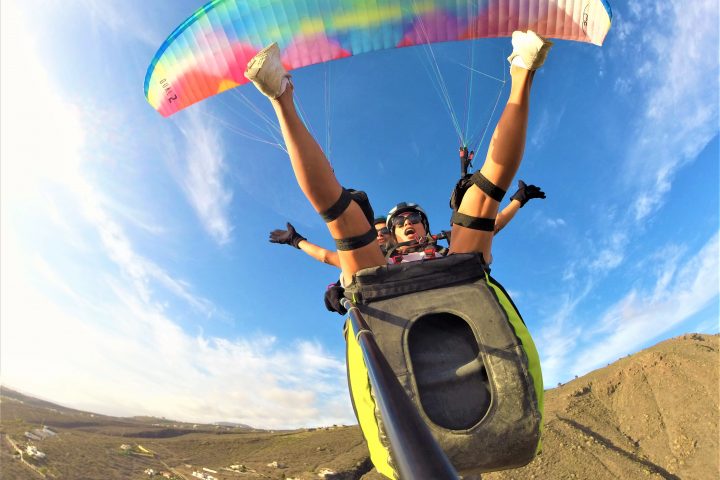 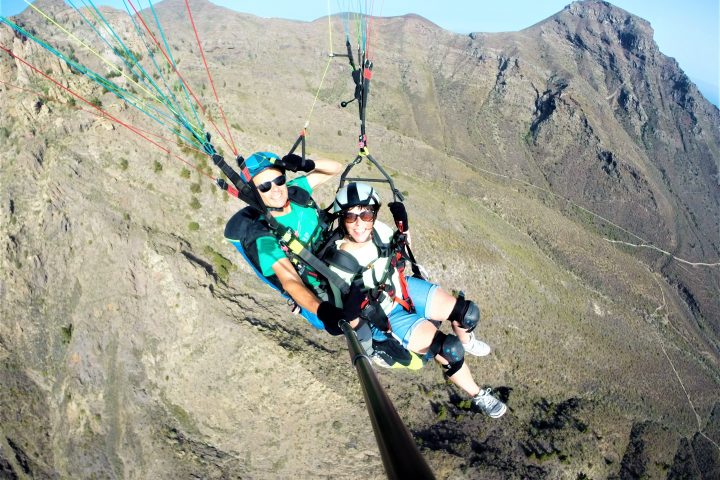 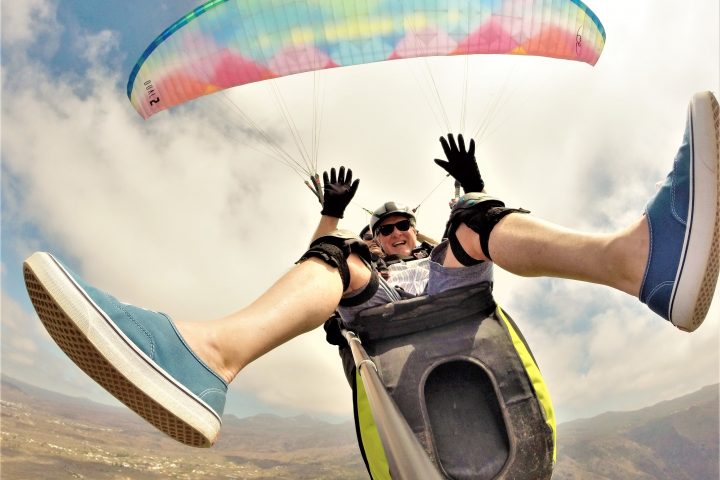 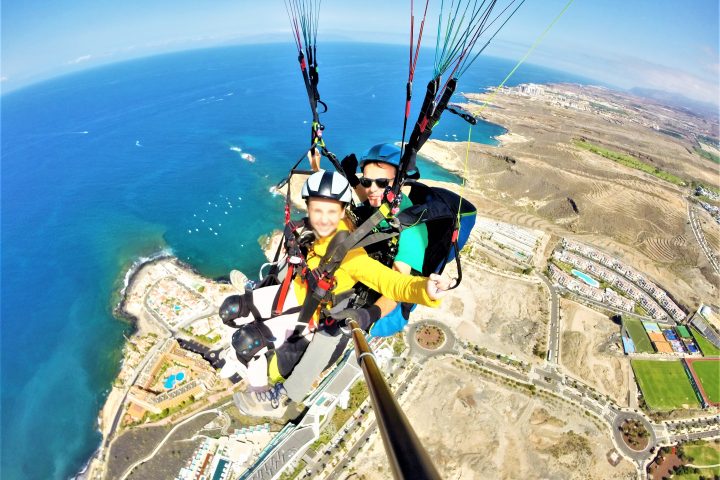 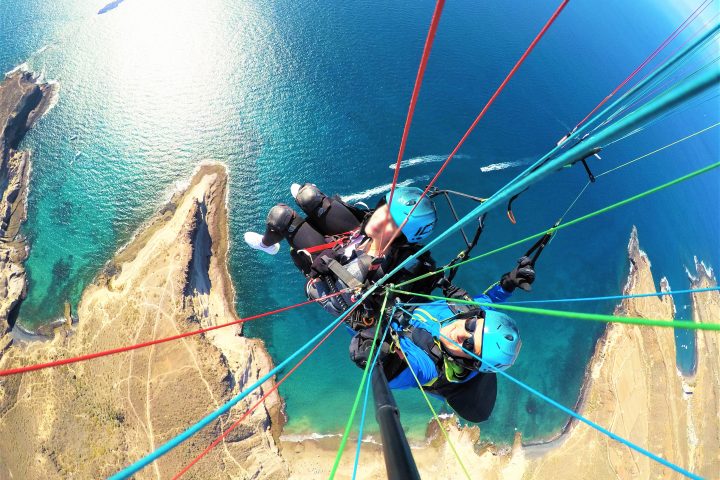 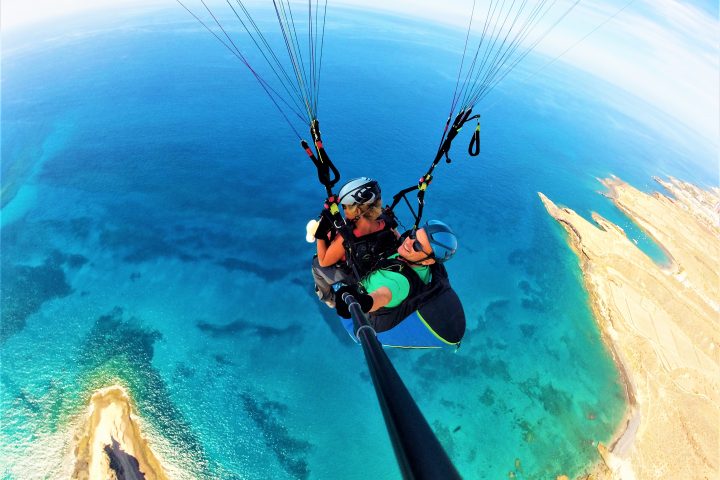 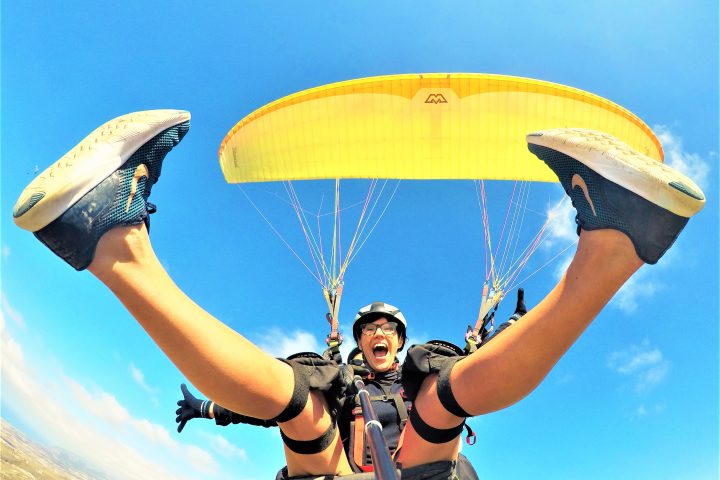 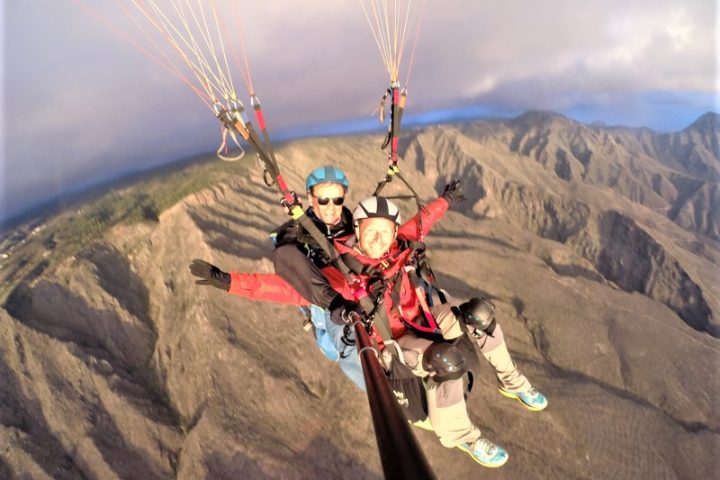 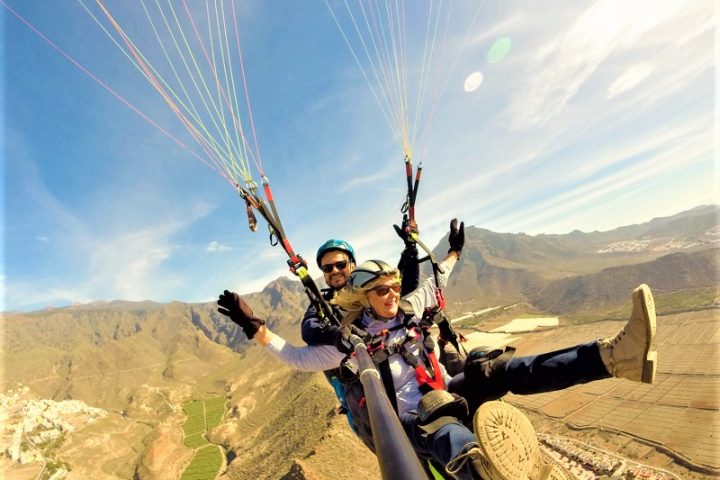 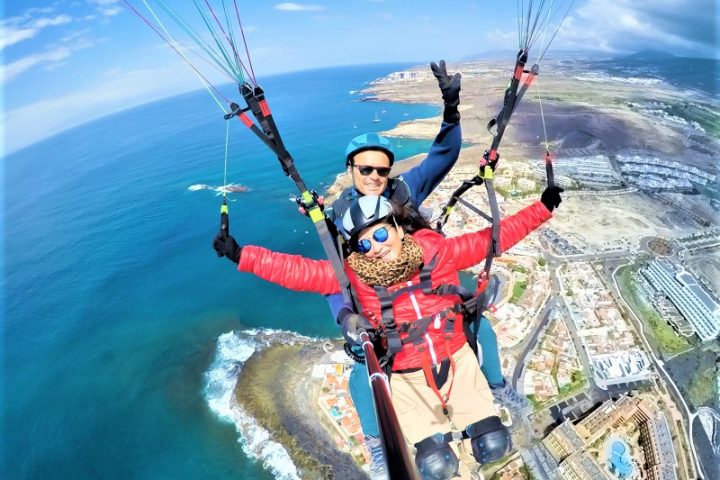 Paragliding in Tenerife starting from the south

Do Paragliding in Tenerife South getting one of the most spectacular views of the Mountains and Coast of Tenerife.

Perfectly organised for you with the PICK UP from your Hotel directly outside the reception.

You will have the pick up from the hotel included.

If you are staying in Los Gigantes / Puerto Santiago there will be an extra charge of 10.00€ per person for the transport.

You can realise the Paragliding if you are staying in Los Cristianos, Playa de las Americas, Costa Adeje, Playa Paraiso, Los Gigantes, and in the surrounding areas.

If you always been dreaming about flying like a bird contemplating the world from the sky then paragliding could be a great choice for you.

Paragliding is an activity which is not easy to describe with simple words. However we will explain you how it is to fly in a Tandem with a qualified paragliding-instructor. An experience which you will always remember like something special, amazing and unique. That’s why we will also take photos of you during the flight. The photos are offered to be purchased after the flight.

You could experience adrenaline, highs, breath taking panorama-views of the mountains and coast of Tenerife, and much more in this Paragliding flight.

You will enjoy an incredible breathtaking view of Tenerife south, that is for sure. This is something which a very few people experience every day, and some others are dreaming about realizing such an amazing activity already for several years. Sometimes even during their entire life. We recommend to everyone to realize this at least one time in the life.

Once you jump, we are pretty sure you will understand why people practice this amazing sport. The flight will have a duration between 20 and 30 minutes. The start point will be chosen depending on the climatological conditions. You could start from Ifonche or from Taucho. The landing will be at the beach of La Caleta or Costa Adeje. The entire tour will take between 1 and half hours and 2 hours.

The pick up is provided in the south of Tenerife for free in the following locations: Los Cristianos, Playa de las Americas, Costa Adeje, La Caleta, Callao Salvaje or Playa Paraiso. From the Area of Los Gigantes, Puerto Santiago and Playa de la Arena there is a supplement of 10,00€ per person for the transport.

Everything is organised, to provide you with maximum comfort. The Paragliding will PICK you UP directly outside your Hotel. And of course after you landed we will bring you back as well.

To make the Paragliding in Tandem some basic physical conditions are required. You have to be able to run.

Children are able to flight with a weight over 20 Kg with the permission of the parents. 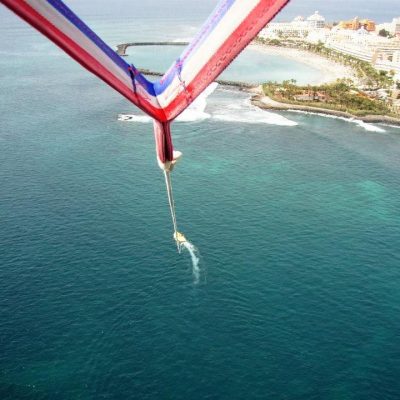 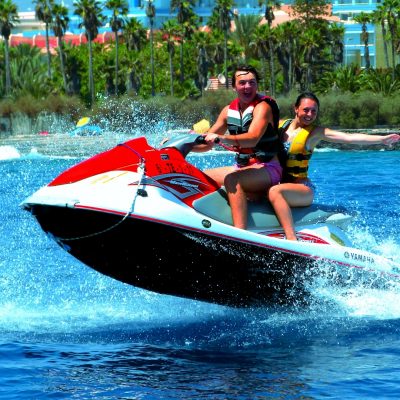 If lazy beach holidays are not for you and after few days of relax on the sand,... 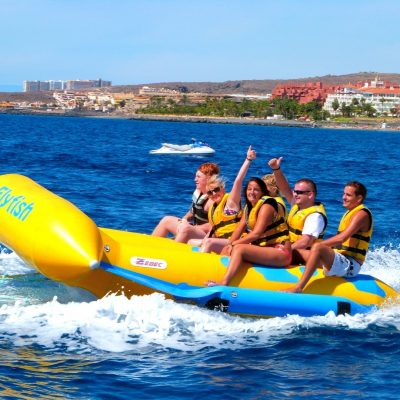 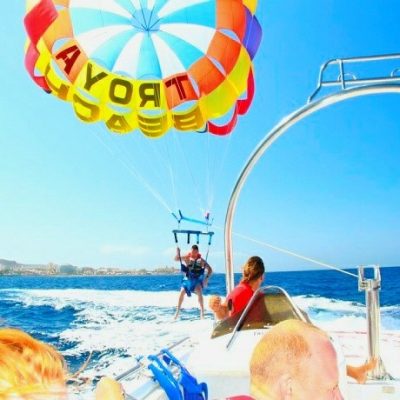 If you are looking for new experiences, parascending in Tenerife South will be... 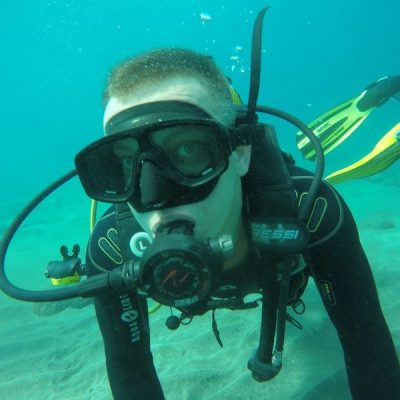 If you never had a diving experience before, you will have a good chance to try... 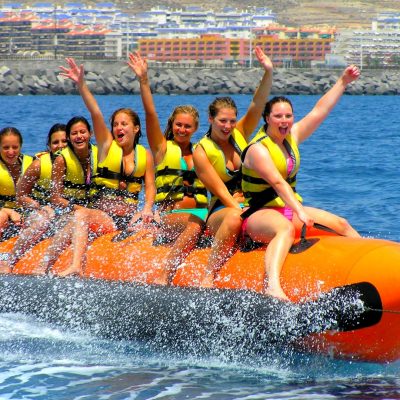 Mix taking the sun and swimming in the ocean with this amusement activity. Take... 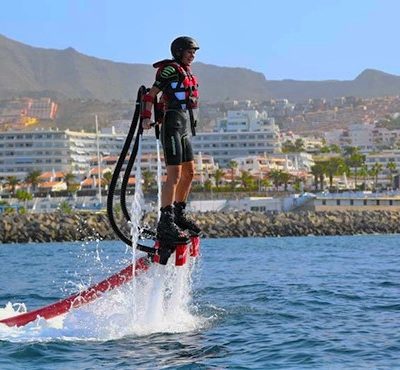 The fun is guaranteed since 95% of those who tested for the first time begin to... 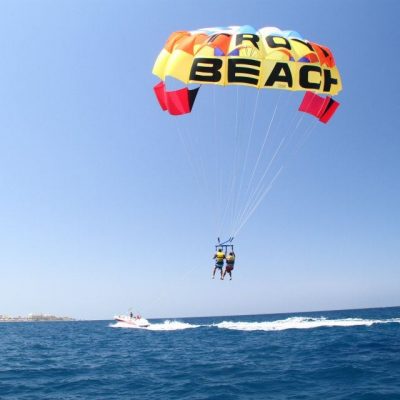 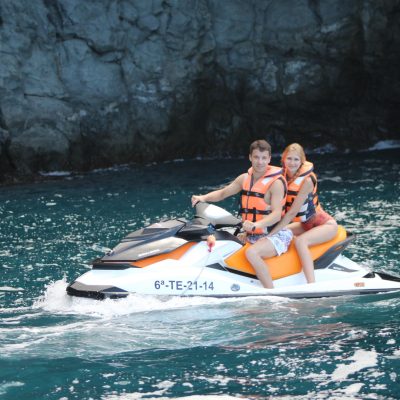 For thoose who love ocean, sun, nature and adrinaline to be combined in one... 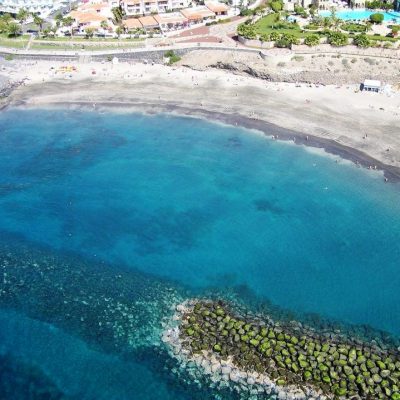